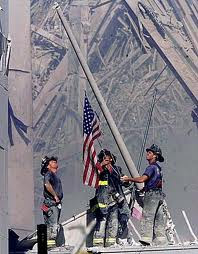 I awoke in a heightened state. In fact, such a state that I sat straight up in bed as if I'd heard a crash outside or an intruder in the house. As I sat there bare-chested, listening for any continued noise, I held my breath in the waxing light of the morning that peaked in around the edges of the window shades. No intruder and no noise repeated its alarm.

I checked the blinds. Checking the blinds is a quake veteran’s response to see if we'd just had an earthquake. If so, they’d be moving back and forth ever so slightly. No moving blinds. Strange.

But, I wasn't yet convinced that the scare that woke me had no source. Out of instinct, I turned on the clock radio.

"We're getting some breaking news here. It seems an airplane has mistakenly collided with one of the World Trade Center towers in New York. We don't have all of the details, but we will pass them along as they come in."

"What?" I said aloud. Without knowledge of the coming catastrophe that would compel every single American, and much of the world, to be transfixed for days, I jumped out of bed and ran down the stairs to turn on the television.

I’d just been on the roof deck of the World Trade Center three weeks earlier. Took a few pictures. Called my Mom from the "Top of the World." Tourist stuff. It was mind-boggling to watch the tower burn when my visit was still so fresh in my memory. I watched without blinking. I watched without thinking. Half of the country was still waking up, yet here I sat on a San Diego morning completely tuned in.

And then, the second passenger plane hit the Trade Center.

"Oh. Shit." I sat up and leaned forward, totally confused. Even reporters were baffled by what was happening in New York City. And, on top of that, reports were coming in about rumored accidents in other parts of the country.

I called home to Missouri. "Mom, turn on your TV right now. Something is happening in New York and a few other places around the country. I think we're under attack." It wasn’t my own deduction; the news stations came to the conclusion before I did.

"What?" came her reply, more unbelieving than astounded. On that day, the same reaction had to have occurred millions of times.

"What channel?" she asked.

At that point, it didn’t matter what channel. "Any channel, Mom. I don't know what's happening, but you need to see this. The World Trade Center has been hit by two airplanes and it's burning."

"Okay. Okay. I'm turning it on now," she decided. I could hear her walking across the hardwood floors in her home, grabbing the remote control; the sound of the waking television instantly reflected the tragedy of the day. "Oh, my God. I have to tell your Stepdad. I'll call you back. I love you, be careful."

I hung up the phone with Mom and tried to contact friends that I knew in the New York area, but I got nothing, not even a busy signal, because the entire world was trying to do the exact same thing at the exact same time. I took to the internet, where more and more of my friends around the world were logging in and talking about the tragedy.

I didn't leave the couch for a few days. The TV stayed on the entire time. A few weeks later, a woman that I'd met while in New York changed her international vacation to a San Diego visit--she just wanted a place to relax for a week. It would be easy to say that I could relate to her anxiety in the weeks after 9/11 because we all felt offended, but I can't. Though I felt attacked that day, I wasn't there. I didn't have friends that worked in the World Trade Center. I wasn't part of an effort to account for co-workers that walked across Manhattan to her office to check a box on a piece of paper that proved they were alive. I didn't help them scramble to reach their loved ones. I didn't see pain turn to relief on the soot-covered faces of those New Yorkers.