It was her smile that gave her away. When she saw me, for only a brief moment, the past was erased and the future, which consisted of nothing beyond feeling me in her arms, was the only thing that mattered. And then, her brow creased as reality caught up to her. I heard in her head, "What are you doing here?" and then the thought was gone as she realized her transparency, especially to me. 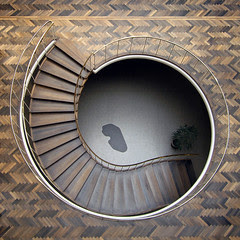 Image by seier+seier via Flickr
Having noticed her concern, I halted our normal routine and stopped my approach outside the reach of her waiting arms. My ceased action was disconcerting to us both, but our world had changed. "Wait," I started as realization hit me, "You told me what time and where you were going to arrive, but you didn't intend for me to pick you up?"

She shook her head back and forth.

"Then why did you ask me to bring all of this baggage?" I asked pointing to the cart that I'd pulled in behind me.

Ignoring the question, she replied, "My aunt is here to pick me up," and then abruptly looked around to see if her aunt was nearby as if it wasn't her aunt that she was actually seeking. Her eyes didn't return to mine, they returned to the cold tile at my feet.

She just lied to me, I thought. It wasn't her aunt that was coming, it was someone much more important to her and controversial to me. I squatted down far enough to have her notice my change in posture. Once I captured her eyes with mine, I turned and walked away. The marbled and tiled passageway felt suddenly cavernous and sterile; a feeling that had never existed in our past. Each step of a few feet felt like another hundred miles of distance between us.

A Charybdis emerged in her head, sending everything around her into a whirling blur. And, as I felt her about to be swallowed by oblivion's vortex, she shouted, "Hey!" I didn't turn around. Hey, a Coke, and a smile weren't going to fix it this time because she had flat-out lied to me, and that instantly put me in the same class as all the others that she'd lied to about her life. "I didn't want to hurt you," she admitted. I could sense that her hands wanted to reach for me. "He is coming to get me." I knew exactly who he was.

I turned and said, "I'm not here to save you. I'm just here to give you your stuff. You deserve, at least, that."

Her head tilted slightly to the side and she smirked as if I'd cracked a joke, but I hadn't. "I know what day it is," she said, "but I can't do anything about your two wishes."

I ran my fingers through my long hair, pointed at her baggage and said, "There's more where this came from." With my index finger I indicated where she could find everything else she'd been looking for.

As I turned away, hurried footsteps softly echoed from the hardened walls of our friendship.

Posted by Robert Zamees at 6:18 AM