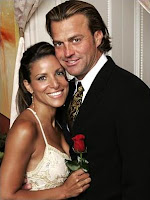 Some of my great gal pals in the Valley, Silicon that is, said, "You should have your own reality show, Bobby!"

I responded and said, "Y'all don't know about the time that I was almost The Bachelor?"

Backed myself into a corner to tell this story now, haven't I?

The Bachelor, Season 6. Fresh off the heels of 5 straight bachelors, none of who ended up being with the girl that was left standing, ABC had decided that they were going to try and find a bachelor that was a bit older. Because we all know that once a mid-20's man knows that every woman in the world now knows that he is single, he will be the last person on Earth to fall upon one knee and mean it.

So, I told her about my friends and family, which launched us into a 45 minute conversation (aka phone interview) that culminated in her telling me that the casting call had ended the previous week, but they weren't sure what they were going to do for the next season. If I could come up to LA for an in-person interview, then they would consider me for the role of the next bachelor.

It was Monday, so I scheduled the interview for late morning on Wednesday. I caught my breath, filled out the lengthy application and made my way to a friends' place in LA on Tuesday night to avoid any traffic complications that I might encounter trying to drive up from San Diego.

Being the creative person that I am, I knew I needed to do something to stand out from all the other Joe's that might be considered. Except, I had no idea what I was walking into. One person? Producers? I envisioned a police interrogation room with a single bright light hanging over my head.

I came up with a plan.

When I met Amy, I gave her a yellow tulip (note: not a red rose) and thanked her. Despite the outcome, she'd already given me three wonderfully enjoyable days.

Amy and I sat down in a very small room with two chairs and a video camera. She asked me all the same questions that we'd previously discussed over the phone. The point, she said, was for the producers to see how I looked on camera. After about 15 minutes of recording, she said everything looked great and she'd be in touch that week.

However, I told her that I'd prepared something special and it might behoove her to record it. I began to tell the story of my life and how it's analogous to the movie Unbreakable, which stars Bruce Willis and Samuel L. Jackson. Samuel is brittle-boned and believes that there is a person at the other end of the spectrum that is a hardened human. The analogy: I'd caught seven garters in my life, yet I'd never been the next one to get married; I'm that guy that catches garters and they keep him single.

As I told the story, I pulled individual garters from a pants pocket, from off a wrist, inside my jacket pocket, and finally said when I'd reached the last garter, "My sister was one of those that nominated me for The Bachelor, and this is the garter from her wedding. Because her and I live 1500 miles apart, the only way that she could think to find me a good woman was to put me on television."

"I'm tired of catching these. I'm ready to throw one," I ended.

Amy smiled, turned off the camera, and said, "That was really good. I'm glad we recorded it!"

I reached Amy by phone a week later and she told me that they'd decided to go a different direction. The result was The Bachelor: Season 6, where they brought out two 40-year old men on the premier and let the ladies decide who should stay.

It was an entertaining season for me to watch, for sure! Byron (shown above) said he was truly in love with Mary, but she was arrested in November 2007 by police and charged with domestic battery. I wouldn't have picked her, there was a beautiful, sweet grade school teacher that I adored. :-)

That's my Bachelor story!
Posted by Robert Zamees at 4:17 PM