CHIEFS Worth a Pot to Piss In? 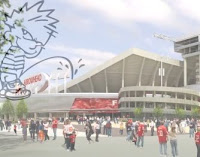 Not that many of us had expectations of a fabulous NFL season here in the land of the CHIEFS. But now that we are seeing first-hand the calamity that King Carl and the Herminator have created, it is time to focus less a team that's not worth a pot to piss in and focus more on the pots that we want to piss in.

I've you've ever traveled to a another stadium in the NFL, then you'll instantly appreciate the layout of the men's bathrooms at Arrowhead, aka THE TROUGH.

Architects of these stadiums have forced you to stand around in line instead of watching your team play ball. Of course, all those Bronco and Chargers fans probably prefer ball-watching in the bathroom instead of on the field.

Therefore, it is imperative that we KEEP THE TROUGH at Arrowhead.

KEEP THE TROUGH.
Posted by Robert Zamees at 8:25 AM

Don't be talking bad about my Broncos man. Them's fighting words. [Yes, out comes the real reason I got run out of KC- ha.]

Of course, I don't really use the men's bathroom, so in this respect, I guess I don't really care whose flag ya fly. Flame away. Or you could wear diapers ;)

I understand the desire to rip on the Broncos.....the undefeated, AFC West leading, all-guns-firing-on-offense, and team of destiny Denver Broncos. However, if you ask nicely and speak well of them, they just might lend you one of their quarterbacks next weekend (and Lord knows you need one).

I knew Heidi would chime in on this one... but those Bronco fans were the worst I've ever experienced anywhere, ever. They threw empty bottles at a pregnant woman and told us to F-Off all the way out of the stadium after barely beating us in overtime. I promised to buy a beer for anyone that said something more intelligent than "You suck!" and nary a beer was bought.

Yes Bobby, destiny (how else to describe a team with 2 consecutive miraculous wins - - thank you Mr. Hochuli). The real Bronco fans, people like me, are on a waiting list for approximately 180 years anxiously awaiting our chance to enter the hallowed grounds and utter some more intelligent smack than the traditional "you suck." I vow, here and now, to come up with something far more original when I become a season ticket holder.....and given I have 180 years to come up with something I am sure it will be quite witty indeed.

As an expert wordsmith, I fully believe in your vow.

It seems as if availability has become tangible here in the home of the Chiefs after 20 some-odd years of sell outs. Bunk.