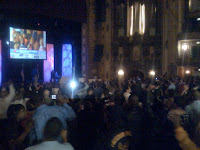 What an incredible night!

At the last minute, I was invited to the main Democratic Watch party at the beautifully renovated Midland Theater (thanks, TessK!). I’d never been to a watch party, especially one that was likely to produce a win for my candidate. Little did I realize that the evening would be much more than just a party for me… and for the world.

When I arrived slightly after 7pm, the crowd was still sparse. Most of the local volunteers were still out on the streets doing their thing to get Democrats into office at the local, state and national levels.

I wandered around the Midland admiring the immense chandeliers hanging from the ceiling and the ornate woodcarvings on the walls. “Historic,” I thought, “this place hasn’t changed at all.” I’d been to the Midland once before when, as a child, my father brought me out to see “The Empire Strikes Back.”

As the night continued, both attendance and electoral votes were building for Obama. As CNN, the channel of choice at the party, put a state into Obama’s column, the crowd would stop their merriment and roar with delight. Pennsylvania. Indiana. OMG OHIO!

CNN reports that GOP insiders admit that the race is over, yet the crowd remains pensive. We are all waiting for the same thing, 270 electoral votes. A wave of energy—of Hope—that had been building for generations was coming to a crest.

While CNN breaks for commercials, the sound system at the Midland plays inspiring tunes such as “Change Is Gonna Come.”

“Oh, there been times that I thought I couldn’t last for long,
But now I think I’m able to carry on.
It’s been a long, a long time comin.'
But I know a change gonna come.
Oh, yes it will.”

The music takes my eyes from the projected television and prompts me to look around. White. Black. Asian. Latino. Tall. Short. Known. Unknown. Young. Old. T-shirts. Suits. Smiles. All smiles. Everyone sitting up straight or standing tall. Everyone smiling.

I was micro-blogging the event, so I tried to stay on the outside of the experience and looking in. I took a break for an Obama-dog and an ObaMerlot. In a corner of the lobby, I saw the head honcho for the Obama movement in KC pacing back and forth on her phone. Missouri wasn’t going to easily go blue, it was going to kick and scream. I could see the tension on her face; she wanted to win the battle and the war. 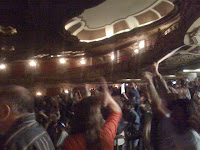 The wave crested around 10pm. It still gives me goosebumps to recollect the experience. The crowd counted down, 5-4-3-2-1 and CNN posted that Obama had won the election. This wave, made up of millions of hopeful Americans, flooded the Midland Theater and we all splashed about in it for countless minutes. I was no longer on the outside looking in. I was smiling, too. I was clapping, too. I was high-fiving, too. I was singing, too. The elation changed into dancing and singing. An old theater was colored with Hope. An old theater was remade into a kaleidoscope of Hope.

Congressman Cleaver took the stage. He spoke of how “YES WE CAN!” had changed to “YES WE DID!” His words brought me back to Hope. He said it was okay to strut a little bit tonight, a little bit more tomorrow and to put a skip in your step on January 20th, but that we must remember that “YES WE CAN!” is only the beginning. We have to come up with a new slogan and continue riding the wave of Hope and Unity.

McCain concedes. The watch party boos his recognition of Palin’s hard work. And just like that, division returned.

But then our Leader-elect entered the room with a calm, omniscient, kingly presence. His face filled up the screen and his spirit the entire theater. As he walked to the stage in Chicago, one of his volunteers was singing the National Anthem to us in Kansas City. Hope.

All I can recount from the emotion of Obama’s speech was what I Twittered to the world:

It will be a few days before I fully realize the unprecedented nature of the experience that I had at the Midland Theater. The world is a different place this morning. I've realized that the Empire is truly the American people, the Empire is good and last night we executed the first step of a long-term plan to renew our country.

My ears are still ringing from the roar of the party last night. I’m Hoping that, at least, will Change.
Posted by Robert Zamees at 7:55 AM

Right on Bob! Wish I could have been there.

I really did think twice about going since I was going by myself. But then TessK said she'd have downtime and I realized that I go to crap by myself all the time and I'd probably regret not going if I didn't do it!

What a wonder-filled experience, and what a transformational year its been.... Amazing, all of it, and so important to be a part of, even when it wasn't pretty - Thank You for sharing it with us.

Cheers go out to All on the Renewal (or is it the re-awakening?) of the American Dream, and re-lighting Lady Liberty's torch... Good thing we Americans aren't afraid of hard work - Now it really begins!
Darce

Glad you had fun; sorry partisanship had to deal a blow to idealism.

Someone always feels the bitter need to pee on the Cheerios. I believe in partisanship with civility. We need to meet on common ground with conviction, not angst.

If relayed accurately, unfortunately I wouldn't call that angst but bitter vindictiveness.