For Love of the American Dream 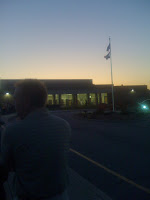 I voted with a smile. I didn’t need to get up before the sun and stand in line, but I couldn’t sleep any longer. In fact, when I saw the line I became more exhilarated for the great opportunity that we have in this country to make a statement with our vote.

It was chilly and it took an hour to complete the task, but no one complained and absolutely no one that stood in line, or even did a drive by, turned and left. There was a sense of community amongst those nearest me in line. We were all telling jokes and talking about hope. We were liberals and conservatives, and we were there to fix the country.

However, no one was talking about politics and I find that to be a problem with our country. Just last night, a friend said to me, “Can I ask you a personal question?” He wanted to ask about my candidate preference. I have no problem talking about politics (or religion), for my freedom of speech gives me the right to do so. We ‘should’ talk about these things at the dinner table and amongst friends. “Of course,” I replied and continued with conviction, “Obama.”

There is passion in politics and that is the beauty of it! How do you form your own opinion if you don’t listen to the opinions of others? We should talk these things out whether we have a solid stance or we’re sitting on the fence. The community aspects of social marketing and Web 2.0 are making opinions more visible. I hope that will eventually make its way to the more traditional forms of media. In fact, we’re seeing some of the 24-hour news channels run opinions on their tickers and incorporate them into the newscast.

The fear machine is alive and well here in the mid-west: a Muslim, a terrorist, an illegal immigrant in the family, a harbinger of racial riots, the destruction of small business. For every person that brought these concerns to the conversation I asked, “How can you vote based on fear and not the issues?” You have to vote based on what they say they will do and, to a degree, what they have done. You have to do your homework and skim off the contextual slander to get to the foundation of the candidate.

So many people are voting based on what they think the candidate will do for/against them personally. I’ve always found that to be a faulty way to cast a ballot. It’s the hangover from issue-based, divisive voting that has made up the past couple of elections since the far right pushed to make the focus of the election such issues as abortion, flag burning, gay marriage and gun control. They did this to get more voters to the polls. I’m happy to see that more people are going to the polls for issues other than those that have historically divided us so greatly.

Vote for what is best for our country. We are a resilient, innovative population of Americans, but we need a true leader that can rally our spirit to forge a new world. It’s been a long time since there was a beacon of hope in the world. Today we have the opportunity to resuscitate the American Dream.

My compliments on a very well written article covering a most urgent topic.

I appreciate your readership and your compliment. Thank you.