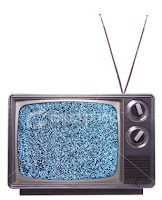 I suppose the real question... since I'm without television service, by choice, am I slowly going crazy?

Is it the brain-dead act of watching TV what maintains the population's sanity?

Turn it off for a month (sorry @tessk) and see what happens. I guarantee that once you get past the fix, the boredom of not knowing what the hell you're supposed to do with yourself, then you'll find a place where you think.

Maybe you read a book.
Maybe you draw a picture.
Maybe you call your Mom and say hi.
Maybe you write a poem (or a lengthy book).
Maybe you clean the house.
Maybe you're baking a cake and stumble on the cure for cancer.

I dunno what you will do, but whatever it is, you'll be better off than watching the tube.

On the other hand, maybe you'll spy on the neighbors to figure out when you can steal their new Wii... perhaps, I should rethink this post before it starts a riot of humans who think. This is my greatest fear, that the violence that is found on TV satisfies the violent soul in us. If we didn't watch it on TV, then we might act it out in real life. I don't ever feel that way, but it is my fear for others.

Imagine that, if we all took the time to think about the world instead of watching it unfold on TV. Imagine it. As Americans, we are innovators, there is no such thing as perfection. Part of our motivation comes from guilt, so start feeling guilty about watching 3 hours of television every night. Feel guilty because you're killing your brain and training it to sleep while you're awake. Silly rabbits.

Imagine it, if you can. You might have to turn off the TV first, though.
Posted by Robert Zamees at 4:27 AM