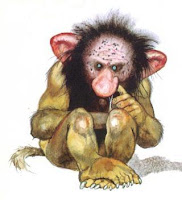 This sh1t just cracks me up. Politics taught me thicker skin because the Trolls there are relentless. I admit, since I have a little free time right now, bopping Troll heads has a little entertainment value to me... especially because the bopping isn't as a representative of a brand or an image other than the acutely insane one of bigBADbob (which has a value of slightly less than zilch).

Awesome, another card-carrying Troll that sits beneath his bridge in anonymity to fling sour words at those attempting to bridge from the world of ideas to the world of fruition.

"Can't land a job?" Who said I needed one? I want one... totally different concept, though confusing for the Troll-mind to understand, I'm sure.

"They're making damn good money." Of course they are and I applaud them for doing a job that most would abhor. I've no qualms with them and resent that you claim so. However, it points out that Trolls have no idea WTF I'm talking about.

Bread line? I make my own bread and it's so much sweeter than the muck and twigs of a Troll's diet.

Oh dear... this sh1t really does crack me up... maybe you just need to read the whole thread...

SORRY FOR FEEDING THE TROLLS!
Posted by Robert Zamees at 2:26 PM

Dang, no doubt. Who knew they had such large appetites? But the trolls disturb me less than the "allies" plagued with interpreting everythinig so literally. We're all human man. And sarcastic smart-assitude is my weakness. Maybe I was just offended by the 'bigFAGbob' and 'douchebag hipster' comments, which were far from deserved. Maybe I'm PMSing. As serious as this philosophic topic is, I think what tees me off the most is people's lack of a sense of humor. Granted I (and you) have a twisted one!

Like I would want to waste my time ascribing to 1984 meritocratic annihilation- who the hell wants to clean up that bloody mess? I'd rather prevent it.

Besides, world domination through violence is not my bag baby. And it's just downright tiring. I need a nap. ;) Fun times on the battefield with ya Roberto.