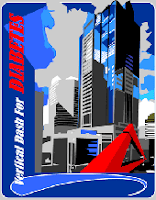 If you follow me on Twitter (@zamees) then you know that I've been humpin' stairs all over the Plaza to train for the Vertical Dash to seek the cure for Diabetes. I found a parking garage where I can hit the 6th floor button in the elevator and dash up 5 flights to try and catch it before the doors close... then, of course, ride it down and do it all over again.

I didn't have anywhere to actually train 34 flights at a time, which is the distance of the dash. So, I hoped that running those five flights and doing them 7-10 times in a row would provide the over-training needed to find a pace for the 34 flights of the event.

The day of the event was filled with my friends talking about their goals and hearing stories from all the people that were that had done it before. The guy in front of me wanted to get it done in about 8 minutes. The guy behind me did it 8.5 last year (and his wife was the female champ). We were lined up in order of number and I had a 9:15 start, 15 minutes after last year's best would start their races.

There was so much adrenalin that I took the stairs two at a time for the first 5 flights, then switched to quickly hitting each stair and knocking out the flights like crazy. I passed 5-6 people that were in front of me (we started in 10 seconds intervals) and then realized that I had a long, long ways to go. So, I settled into a walking pace and cruised up to the 20th floor before I started to feel it. At that point, I caught the guy that started in front of me and he was behind 3 girls. That far into the race, passing was tough and they were hittin' it a little bit slower than I wanted to do it. So, I pumped up the pace and passed them on the 24th floor and kept the pace up until I was two flights ahead.

By the 28th floor, I was spent. I rested until they were one flight closer. On the 32nd floor, I had to take another breather and 2 of those that I'd passed got back past me. Drat. I fell back into line behind them and finished out the last 6 floors, but I couldn't keep up.

I crossed the line, just happy to finish. Legs rubbery, sweating like crazy, breathing heavily, 4 of my 5 friends waiting to cheer me in, the 6th started 50 seconds behind me (and never caught me, whew). I wanted no part of stairs anywhere at all anytime soon.

When the sixth in my group made it up, she was the same way... don't ask me no questions and leave me alone while I suck air. :-) As we regained our strength we started to talk more about the experience (while coughing a bit and trying to regain equilibrium... hiking up 34 flights and then jumping in the elevator to come down plays havoc on your ears). The friend behind me asked how much time was between us and I said, "About the same as we started."

Lo and behold, we finished with exactly the same time... not in the 10-12 minute range, but 7:38! It put me in the slower third of the men, but the best of my friends, so I was happy! And, the guy that I passed that passed me back in the end? I got him by 1 second... likely when I ran the last 4 steps to the line.

Congratulations on your time. I got some silly idea in my head that I wanted to give this a try. I figured it would help motivate me to get out and exercise more. I definitely got out and got moving. I had been training at a hospital- I figured that was the safest place for me. Even though I had lost 20 lbs in the 2 months before the race- I started this race at 284 lbs. Everyone thought I was crazy...but I made it. It took me 20 min and 32 seconds but I was so proud to get to the top. My goal next year is 15 min or less. AGAIN--GREAT JOB!!

I convinced 5 Lee's Summit Moms to join me and we had the best time... all with the same goal... just make it to the top!

See you next year!