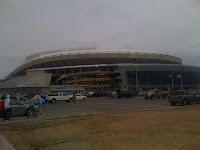 Attended my first game at The New "K" last night. For those that aren't in the KC area or don't follow the new stadium trend. K stands for Kauffman, more specifically Ewing Kauffman, who was the long-time owner of the Royals back in the day when they were good.

A few years ago, Kansas City voted to renovate our existing stadiums instead of build new ones. Arrowhead and Kauffman were designed well from the get-go. In fact, the Royals stadium was one of the first where the seats were all angled toward the action. And Arrowhead, as you may know, has been one of the loudest stadiums in the NFL from day one. Their needs were more on the exterior than the interior: bathrooms, concourses and concessions. 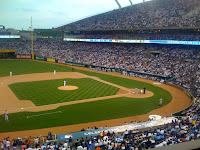 So, let's evaluate it for those particular upgrades...

BATHROOMS: This is a tough one for me to evaluate because I was on the club level. However, there were bathroom attendants standing outside of the mens' and womens' areas that seemed to clean the rooms at least once during the game. My biggest concern was that they've screwed up the design by pulling out all of the troughs and inserting individual urinals. Face it dudes, when you run to the john between innings after 3 or 4 beers, you don't mind going elbow-to-elbow to avoid standing in a long line. They've screwed this up at many stadiums around the country and the "K" seems to be the latest. BATHROOM GRADE: C. 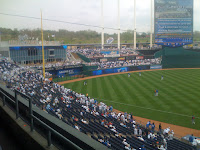 CONCOURSE: The concourses around the stadium used to be really narrow; it was like trying to make headway on the floor of a U2 concert or like trying to swim upstream in both directions. They've done a fantastic job of opening up the width of the concourses so that it's easier to get around and the lines at the concessions no longer impact movement. PLUS, you can now walk all the way around the stadium, which was never the case until this year. CONCOURSE GRADE: A. 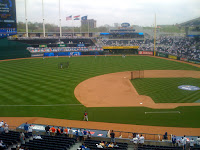 CONCESSIONS: Big fat effing FAIL. That's all there is to it. 1). You can't even get popcorn, nachos or a pretzel on the Club Level. You have to walk up or down to another level. We showed up super early for the giveaway, so I had a couple of courses. 2). Every single effing thing I had was lukewarm and soggy. BLECHT. Fries, hot dog, pretzel and onion rings... my aunt said her cheese steak was cold, too. CONCESSIONS: F-.

I'll be back out at the park on Tuesday night and will spend some time in the outfield areas. I've seen about nineteen of the stadiums around the league and most of them have included these SRO area in the outfield that are pretty entertaining.

Aside from sh1tty concessions, I dig my new "K!"
Posted by Robert Zamees at 10:06 AM