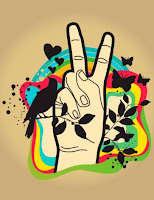 In all my thoughts, reflected in recent blog posts, I've been talking about committing yourself to the NOW. When you've a task to do, then focus on the task. Avoid being distracted by a text message or a new email or an instant message. In fact, do like I've done, and stop taking your laptop and phone to meetings. Show up with a pen and a sheet of paper and commit to the task of the meeting itself.

The part of "being in the NOW" that I hadn't been able to reconcile until this morning--when I was reading a book about influential persons' favorite places on Earth--was that being solely in the NOW might lead to overindulgence. In other words, I want to enjoy the NOW with my friends and the NOW is represented by one drink after another after another. Hey, I'm in the NOW, so I'm not worrying about the past or the future, right? The problem is that I can't be my best in the NOW of LATER when I'm hungover, so being in the NOW has to have some greater nature to it than what's in front of me at the time.
So, I thought about the point of being in the NOW and realized that it isn't just about giving your best to what you are doing in the NOW, but it is also about being at peace in life. Overindulgence in the NOW makes for an unpeaceful existence in the LATER.
Being at peace is what allows us to focus on the NOW, but it is also what keeps us thinking about the LATER.