The PSA for Hand Washing? 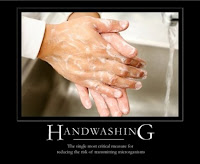 As I entered Midway this afternoon for my return flight to KC (home, finally!), I was repeated reminded to cover my mouth when I cough/sneeze and to wash my hands after using the restroom.

I don't disagree that more people need to cover and wash, but do you really think that an audio PSA in a busy, noisy airport is going to help? No, I don't either. People need to, first of all, identify with the problem. When the swine flu first broke the news, I happened to be traveling that weekend and literally everyone that I saw in an airport bathroom washed their hands. I'd never seen a line to wash before, it was great!

I even sent a tweet (follow me @zamees) to welcome all the new hand washers to the world!

So, we know that we can create a connection with people, but swine flu isn't in the news much anymore and there aren't long lines at the wash basin either. Though we connected with people, there wasn't a long-lasting emotional that brought about a permanent change in behavior.

How can we make an emotional connection about hand washing?

We need to make the connection with people as they are in the act of hand washing... and, perhaps, make the walk past the walk basin as part of the process as opposed to an offshoot between the toilets/urinals and the exit. I guarantee that the unspoken peer pressure of being "that guy" who walked past and didn't wash would get more people to cave and wash.

Except that only addresses the public bathrooms. In order to create a permanent behavior change, we'd need to change behavior at home so that washing simply became second nature. I'll have to think on this one a bit more since I'd rather not enter a police state of hand washing at airports anytime soon.

What do ya think?
Posted by Robert Zamees at 2:12 PM