"There Goes a Special Person!" 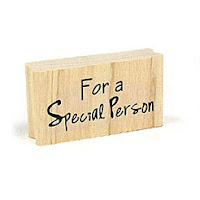 In my travels, I sat next to a gentleman on an airplane that showed me a thought technique--one that I'd been thinking about for years. And though he didn't realize it, what he showed me was the simplicity of something which I'd always tried to make too complex. He was no master of thought; he simply found an easy way to deal with the world.

Whenever he runs across someone that does something that interrupts his day: getting cut-off on the road, waiting patiently for that parking spot that gets taken be someone else, the daily inconsiderations of people... when he encounters these, he says to himself:

"There goes a special person."

Then, he laughs aloud. The phrase reminds him that these brief impacts on his day shouldn't ruin his entire day. In fact, they shouldn't ruin ten seconds of his day. His phrase reminds him that he's a positive person, not a negative one. He doesn't need to call anyone a name, make a scene or flip a bird. He simply says, "There goes a special person," and has his giggle.

I asked him, "How do you define special?" And he said, "Someone that thinks they're special, not someone with special needs."

And then I giggled, too.
Posted by Robert Zamees at 8:25 AM

Very well said. Thanks for sharing that story!

Thank you for your blog comment. See you here again soon!

Apparently, "special people" love to surround me with their specialness.