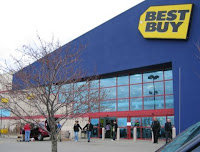 The Best Buy Job Description "contest" closed about four days ago, but we've not heard much from them since. Does that bother me? No, not really, even though I apparently won. I think it serves as a good example for the marketing community; loosely planned social events sink ships.

"The winner is the one with the most votes on IdeaX as of Thursday, July 16th at 5pm Central. What does the winner get? Mostly just publicity, some satisfaction maybe. We debated about offering prizes but decided an authentic discussion is more likely to happen when people are interested in the topic without secondary motivations. We’re hoping for a really robust discussion that perhaps will foster clarity for how to craft these types of roles."

Did I enter for the win? Yeah, a little bit, but I really wanted to engage in conversation with the community and the forward-thinking posse at this large brand. One of the greatest, and most apropos, quotes that I've heard in my years as a marketing professional came from the Head Lifeguard of our Yahoo! satellite office, "Companies act their age." When Yahoo! was seven, it was a cantankerous, moody seven-year-old. When the automobile manufacturers were the age of our grandparents, they were set in their ways, immobile and deaf to new thoughts and ideas. So, what was Best Buy doing to alter an aging corporate culture?

"Of course the resulting job description that we post is ultimately still up to us, but we plan to incorporate the winning idea’s description and qualifications. It may be that we mash-up the top three, or even other entries. We’re confident that good ideas will come from the discussion, and that we’ll incorporate those ideas."

The key words here, to me, are "discussion" and "incorporate." I've been disappointed in the lack of participation by the Best Buy corporation in the conversation and the missing process of mashing or incorporating from the time that several of us spent participating.

I can understand their not being as public about the finality or any learnings from the process. After all, in order to vote or leave comments on the entries, individuals had to register for the IdeaX web site and practically everyone failed to receive the confirmation emails timely enough for their votes to be counted. In fact, most got a flood of confirmation emails yesterday, Monday, four days after the voting period had closed. If nothing else, we helped Best Buy figure out that their confirmation system had a bug that's been squashed.

In this day of social discussion, we want authenticity and disclosure. In fact, we demand it from our brands. Being loyal means that you're always there; you always respond to our concerns and our praise. And, when switching costs are so low--on the Internet we can find the same product from somewhere else where they do respond to us--well, brands should concoct a better plan before just throwing things out into the socialverse, unless they tell us up front that we're just gonna see what happens. We all know how to just go with the flow if that's the expectation that's set.

Deal?
Posted by Robert Zamees at 9:46 AM