Do you want to love forever?

Dear friends and family: This is not me talking; it is for my novel. *asterisktattoo* Don't freak out.

"I never planned on living very long, anyway," she said. I tried to hide my surprise. My lungs had yet to catch up to the fevered session we'd recently completely, and I couldn't fathom not wanting to live long enough to destroy the sheets on my bed once again—to explore the presence and emotion of this woman. 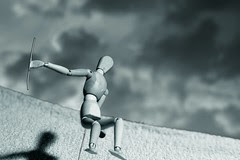 Image by funadium via FlickrDays later, I sat in a bar, oatmeal stout by my side, pondering the meaning of life when you’ve decided not to make it last. Where do we go? Nobody knows. What if I decided that to not live much longer? I once heard my Dad say that he didn’t plan on old age—it didn’t strike me one way or the other, which has nothing to do with our relationship—because shit happens and you never know.

But, what of this conscious choice? Does it mean that I can indulge in alcohol, cocaine, fast food, and nicotine like they were just recently procured during one night with an orange pumpkin and a costume to hide my real age. Can I blow all of my money on high-end call girls who don’t care about condoms or STDs—invite all the chicks and dudes over for a month-long powder, weed, and champagne orgy on my dime? And, shit, thinking of money, why make any more, just blow all of it that’s sleeping in the bank—it’s not making much interest, so why not spend it interestingly?

Do it. Write about it.

Fuck, I’ll not take the higher ground here, maybe my weekly intake of Reduced Fat Cheez-It is the same damn thing. And, add on top of that the promise to name my first kids after the pizza and delivery drivers—oddly enough, they have the same name even though they’re not the same person, Chin—and the fact that I’ve given up on exercise because it cuts into the time I have to drink wine… well, I’m on the fast track to less life anyway.

Forget tomorrow, what if I died right now? What if an out-of-control car jumped the curb, smashed through the window of this pub, and the license plate kissed me harshly on my forehead? What if? What would I leave behind?

Would you cry over spilt stout?

Aside from family and friends—there are no girlfriends, wives, ex-wives, or kids—what mark would I have left on the world? The story that I’ve been writing for a couple of years is pieced together enough that someone could finish rewriting the tale—at least, the first book of the tale—and that might be enough to make people think about their lives. With hope, it may even cause a few to stop, to think about whom they are before they lunge into the societal and political morass of love. Riiight.

I haven’t accomplished all that I would like to accomplish in this life—not by a long shot—but I’ve definitely lived: red carpets, yachts, international travel, drinks with celebrities, love, sex on mahogany boardroom tables, drugs, rock ‘n’ roll, maaan. And, because I’ve lived, I’d like to believe that I don’t fear death. Of course, I’ve never been in a plane with an inevitable impact with the ground. I’ve never been strapped to a chair while a serial killer slowly removed parts of my body. Yeah, I think about that shit, who doesn’t? But, extreme scenarios aside, if asked to watch the movie of me, it’d be some entertaining shit. Yeah, I’ve lived.

So the question remains (unanswered), why plan on living longer? Burn out or fade away? Why did her brazen comment, laden with confidence, strike me the wrong way? Why would I care when her perfect, naked body, nipples still taut from her fingers pinching them as we climaxed, lay there exposed to me and whatever whims my creative mind could conjure?

Because you fall in love with the idea of love.

When I find love, I will want it to last. To what end? Up until now, I’d always defined “last” as “as long as we’re both alive.” But, why does that have to be a requirement? There is no love bible that says true love lasts forever. Shit. Nevermind. That whole “‘til death do us part” thing rather countermands the idea because there is a bible that dictates the longevity of love. Fuck that. Just because we fall in love doesn’t mean that we’ll be in love forever. I’m too much of a relativist to believe in that—circumstances change. Shit happens.

If we both fall in love, do we both want it to last? We could easily both say “fuck it,” burn the candle from both ends, and leave a note with a friend to bury us in the expensive compact sports car we bought so we could wrap it around an oaken hardwood while she sat on my lap with her bare feet up against the front windshield—fucking and driving too fast, all at the same time.

Goin’ down, in a blaze of glory.

Yeah, it’s possible. Satisfying? I don’t know; I’ve never thought about rushing to the finish line because I never thought of love as a race. Even “keeping score” is a fantastic way to drive a wedge between two lovers. Now, I’ve done it—meaning, I’ve been in a relationship that was hell-bent toward death, and it did nearly kill me. Picture a man who can’t get up from the floor—hasn’t eaten, hasn’t had anything to drink, hasn’t showered, hasn’t left the carpet for weeks except to crawl to the bathroom and piss, and even that had been days ago—the phone rings and, oddly, he decides to answer. The voice on the other end will forever have a home in his heart, because it was the voice that reached down into the dry, dark well and offered him a hand; it was the voice of her mother, “I know you love her—we all know—and we love her, too. She’s my daughter, but—this is hard to say because you’ve been better for her than any other man she’s ever been with—leave her before she kills you.” I cried. I cried until there was nothing left inside of me.

Don’t belittle the carnage of emotional over physical death. Looking down from the top of the slippery slope is close enough that the next step is the slippery slope. Gravity is a bitch. It took everything inside of me not to follow her face, her body, the challenge of helping her get right; this “everything” equal to a new understanding of my strengths and reserves. It took everything not to take the next step down the slope. It hurt—like a motherfucker—like no other hurt ever before and ever since. I didn’t taste the end, but I could see it. I didn’t like it, but I made a promise and I had to break it.

I believe—that said, I want to believe—that true love searches and or waits for me to find it. And, hypothetically, if true love lasts a minute, then it’s a minute forever etched on my heart. At least, I’ll know what it felt like. And, if it comes along again, I’ll recognize it.

“I never planned on living very long, anyway,” she said.

Do you want to love forever?