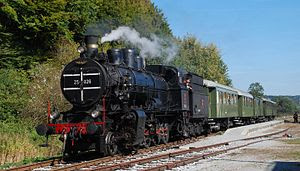 Image via WikipediaThinking, always a good idea, and I took the time to do some this week. My life has been about a combination of searching and waiting; seems like when I find what I’m looking for I must still spend much time earning and waiting to actually have it. No qualms here, I’m thankful for where this patience has taken me.

This weekend, the most impatient person I’ve ever met is getting exactly what she wants and on the time line that she wants it. She’s lucky, very lucky… on one hand. On the other, her recklessness could once again prove to be an out-of-control locomotive hell bound for destruction.

Fortunately, I got out of the way; slipped to the side of the train as it roared past, hot air on my face, smell of smoke in the air that prompted me to squint and wince. I could still hear the bellowing whistle screaming into the air months later. I once asked the conductor, “Why are you always in such a hurry?” She replied, “Because I don’t want to miss anything at the next station.”

When with her, she said that within one year, she was going to marry a man and make a baby; that it was time for her to do such things. These words flew at me, regardless of who I was or whoever might be sitting across from her at the time when it was time. And that was not the train that I wanted to ride—one that never slows down long enough for me to enjoy the scenery or *gulp* actually get off without cracking my skull on the leap.

All I can say is that I hope a true railroad man is getting his ticket punched, one that doesn’t mind shoveling coal into the engine day and night to keep that boiler burning bright. Because as long as the train gets what the train wants… then the train is happy.

Me? I’ll chew on a piece of straw on a bench at the station until I spy someone pondering the arrivals and departures with few cares in the world and no rush to do anything but travel by my side.

Posted by Robert Zamees at 8:43 AM