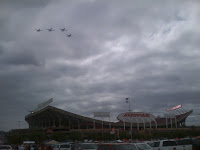 Cool shot of the flyover, eh? Well, what's not so cool about it is the fact that I was OUTSIDE OF THE STADIUM TO TAKE IT!

Maybe you can chalk it up to trying to make last minute plans or that I assumed that my TailDate had been to a game before... but I told her on Saturday night that the best way to the game is via the Chiefs Express (she's way up north and I was carpooling from the south) and that we arrive between 9-10am for the tailgate.

Just to be safe, I texted her a little before 8am to make sure that she was still going to make the game. Didn't hear back from her until almost 10am when I was pulling into the stadium parking lot. She was hungover and had no idea how to get to the game (GRRRRRR!!! That's why I texted you two hours ago!).

So, skip over the frustration and multiple phone calls part and just know that I eventually told her that she wouldn't make it before we went into the game and to forget about it. But, as I was walking into the game, she called and said she found a ride... that she's "not a quitter!" So, I felt I had no choice but to wait for her. 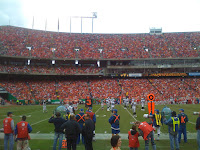 We made it into the game and watched the Chiefs offense blow all four tires. To make it enjoyable, we heckled "Edward" Shane Leckler and Sebastian "Twinkle Toes slash Polish Powderkeg" Janikowski. Although I must admit that I later asked Lechler if he would switch over and play QB for us (he was a backup QB in college at A&M).

Now, how will my TailDate get home? She said that she had a ride home, but that fell through. I'm not going to leave her sitting on the curb somewhere, so we decided to go someplace and wait for her ride, but then ended up just 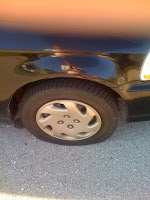 coming home to play Rock Band 2. After some time playing, I said that I needed to get on the road to take her to her car because I was really getting tired. Her car was in a parking lot from partying the night before and when I dropped her in the lot, I ran over a mudflap with two screws poking out of it. It was a slow leak, so I nursed the car all the way back home, stopping at stations along the way to push more air back into it. Yeah, I blew all my quarters, but it was better than changing the tire out in my frustrated, tired state in the dark.

So there you have it... totally deflated. But at least I didn't play as badly as the Chiefs.
Posted by Robert Zamees at 6:42 AM

...and out of all the "applicants" THIS girl as the best one? Really?! Makes me wonder what your selection grid looked like.

Un-freakin-believable! Hungover, late and no way home?????
Wow. I know I'm not as disappointed as you, but I was really hoping to read a great story this morning about a fabulous gal and fantastic TailDate. I'm so sorry. Best wishes to you in your search for her!

I wouldn't wish "looking at the selection grid" to anyone... oh, and I'll just leave it at that.

Now what? Will there be a TailDate do-over or do you revert back to "conventional" dating strategies?

I think today will be a vacation day from dating. I'm going to exercise a couple of times to work off the tailgate sludge, maybe refresh the spirit with some WiiFit yoga, and then see how I feel about re-opening all the channels. I'd do a TailDate again, for sure, and this time I'd have more time to create the buzz for it.

Oh man. She lost me at "hungover".

Soupy, somewhere there is a woman who is up for adventure without being such a jinx. I hereby volunteer to screen the next batch of candidates for you.

Heehee! Thank you Tess & eDUB... you are both amazing ladies that bring a smile to my face!

Hey, how did you select this woman? You know I'm the only one that has really been ever able to set you up, so I was just curious about how she was "chosen" since you didn't blog on that. Thanks!

Wieb, the process police, eh? ;) True, so true, my Wieb has always been spot-on with picking out the ones that I have liked (aside from the whole they've never worked out aspect, she does know what I like).

After I automatically removed all the 20 year olds in rehab, the 60 year olds with nicotine-riddled tone and those that just seemed outstandingly desperate, I chose a woman that I'd been out with earlier in the week.

Ok, thanks for filling me in. And by the way...that whole "it's never worked out thing" isn't my fault. I do the intro and after that it's up to you all! ;-)

Oh Wieb, just poking at you a little bit. Aren't you overdue to pick out a new one for me? Heehee. Come on, you work at a school for goodness sake and I do love and admire school teachers! ;)

I know my wife said it, but she's right. I was thinking the same thing.

How can you roll with someone who can't hold their liquor? heh.

You played much more gallantly and patiently than that girl earned I daresay! Hungover, extremely late and without means of transportation because she left her car somewhere partying the night before? Just plain rude.

Man, I've got one word for chickie-doodle. Taxi. Or maybe 2 words upfront. Forget it. Sometimes people should just quit while they're ahead, and that clueless little thang is one of those people.

I'm sorry you had such an experience, and to end on the flat tire is ironically apropos... but like Tess said, at least it was a humorous tale to tell(in retrospect anyway.)

A far less than merited outcome to your hectic week, but it was well blogged my friend. If I was there, I'd order up a bottle of Ridge Geyserville on me- you deserve it!

Here's to more a fortuitous week ahead!

Charity of the Forest, you take from the rich and give to the poor with your offer of wine. Ridge, from the far away mountains and my former home, would be a wonderful addition to any evening with this level of repartee.

Yes. I am the sole wine drinker in Fayetteville Arkansas, and thus all the wine is mine! Mwahahahahahaha.


You now reside in my former home- dang I miss KC and all the restaurants and my cute little house in Lee's Summit!


Ever been to J. Barleycorns in OPKS? Their open faced sammiches have at least a pound of cheese. Albeit that's a lil' over the top for me. Oh but their fried chicken tenders, real mashed potatoes and buttermilk gravy, and a side o' beer rock! Maybe it's time for me to take a little roadtrip...

Know it, but I don't think I've ever been. I'm a Martin City, MO boy for a big arse chicken fried steak, a football-sized baked potato and a defibrillator on the side at RC's.

Reading this blog just took all the air out of me...:op. I think I can safely say we have all been there with bad dates, but after all the build up, I found myself expecting and wanting a better beginning and ending than this.

Here's to better taildates in the future!