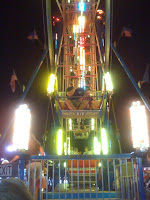 Bobby Blogger took a few days off, have you missed me? I'm going to give you a quick photo montage to get you caught up with what's going on in my world.

After having been immobile for most of the year, I've broken out and taken to the road! WOOT!

First photo is a shot from the Lee's Summit, MO Oktoberfest where my niece did the cutest little dance number ever... sassy-walk girl! She's just the cutest lil' thing and loves to dance pretty much non-stop all day and night. SMOOCH! 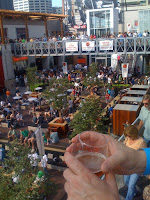 The next photo is from the KC Beer Festival (hence the play on words with Two-festing) where a good time was had. Unfortunately we hit up three bars AFTER the BeerFest and that pretty much ruined my entire Sunday. I definitely made a new friend in Brenda at the first bar we visited, then completely copped-out on a real dinner and macked on some chili-cheese fries (which will be the death of me), totally don't remember a debate about preferences in regard to sexual frequency (which I'm sure was more interesting than the VP Debate last week) and then hit up another bar on the way home. I think the tally was about a case of beer, three DarkRum+OJs and two Negronis. Oops. 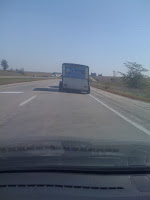 Photo #3 was snapped cruising east on I-80 through Iowa. It's tough to tell, but this SUV flew past me swerving all over the road. The SUV was covered with Obama stickers and the trailer had a bunch of banners duct-taped to it. I later saw the trailer make an emergency roadside stop... hopefully this isn't an indicator of the campaign trail yet to come for the Senator. 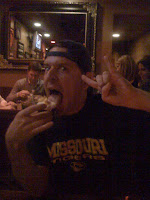 The fourth photo is from last Saturday night. The Cubs got swept, but some lady in the bar was having a Bachelorette or Birthday party (after a day of bocce ball and drinking I can no longer remember which) and she made us all feel better with the best chocolate cupcakes I've ever had in my life. Thanks, Cupcake Lady. BTW, MIZZOU kicked some Cornhusker arse that night which made this MO boy feel better than the IL crew.

Reader VOTE...
Where should I stop on the way home from Chicago?
Log your response by placing a comment! Thanks!
Posted by Robert Zamees at 2:57 PM

An MU game would be the most FUN!!!!
-Meagan

I did Hermann with some friends last year and had a lot of fun... but you have to deal with a lot of drunk college kids drinking wine straight out of the bottle.

Depends on what you're in the mood for I guess....