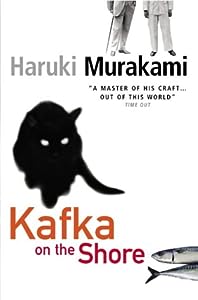 As much as Murakami makes me want to stand up and scream at him, "WHAT THE FUCK ARE YOU TALKING ABOUT?!?!" There is enough intrigue, despite the seemingly random nature of events, that Kafka on the Shore is a book that I know I will read again in the future--like a movie that whizzes by the first time you watch it, but the second time is when you catch all the nuances that make it so brilliant. My brow furrowed frequently; that furrowing changed into fever from the middle of the book until the end. I tried to explain it to a friend yesterday...

It's like reincarnation has overlapped. Like you're in love with two different people, young and old, but they're really the same person. And, somewhere out there, is a place that makes it acceptable despite the legal precedent of cultural mores. Because in this other place, it's core values that matter, not all this other crap that we've layered on top of it in society.

"Every one of us is losing something precious to us. Lost opportunities, lost possibilities, feelings we can never get back again. That's part of what it means to be alive. But inside our heads--at least that's where I imagine it--there's a little room where we store those memories. A room like the stacks in this library. And to understand the workings of our own heart we have to keep on making new reference cards. We have to dust things off every once in awhile, let in fresh air, change the water in the flower vases. In other words, you'll live forever in your own private library."

Posted by Robert Zamees at 9:07 AM