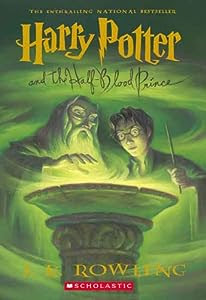 Cover via AmazonPotter's awfully angry in this entire book--got rather old and did so very quickly. On the other hand, I'm interested enough to find out what happens next (and I'm wondering if Dumbledore split his soul like Voldemort). A friend told me that she gave up on the 7th book at page 66; it will be my goal to avoid the same.

And then there was ONE Potter left!

Posted by Robert Zamees at 6:21 AM