For the poetic culture that has been described at Zappo's, this book (hopefully) doesn't nearly do it justice. I realize that the CEO wrote it without a real editor--simply told the stories that he wanted to tell--and that's why it really fell flat to me. Now that I've slammed it a bit, there were plenty of things that I took from it. In fact, it was one of those books that really had me noodling on an idea that's been percolating in my head for many weeks. I constantly put down the book to note the things that were spinning around in my head. So, I thank it for that.
51/64: Young Men and Fire by MacLean, 1/5 Stars
Entertained Me: Low / Made Me Think: Low

This book about Smoke Jumpers was recommended to me by a gentleman I spoke with in a bar a few weeks ago. I rarely refuse to finish a book, but this one finally got to me with all the boring details about fire. I now know that he and I don't enjoy the same kinds of books... and that's okay! 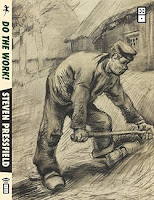 Brilliant, thought-provoking book about pushing through the resistance to your creative dreams. Very quick, power-packed read that all right brains should complete.

"A child has no trouble believing the unbelievable, nor does the genius or the madman. It's only you and I, with our big brains and our tiny hearts, who doubt and over think and hesitate. Don't think. Act."

Posted by Robert Zamees at 4:27 PM