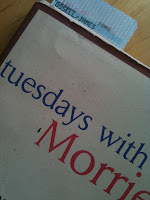 I picked up this book when I left my aunt's house earlier in the summer. She said to me, "Take as many of those books as you want. They're all going to Goodwill!" I picked up two books; this is one of them. I'd been carrying it around for a month, maybe a little longer, but finally cracked it open on a flight from New York to Dallas. About halfway through the book, a boarding pass stub fell out of it... for my recently departed uncle. Jim has made his presence known since he left us, several times when I was still in his house and a couple of times in my own house. I welcome his presence, Jim was a good man. Given the content of the book, it was especially moving to know that he was the last one who read it, and read it on a flight back to his home. And, although, I wasn't headed toward my own home, his memory made me feel at home... and maybe, an airplane really is a second home for my nomadic soul.
A few of my favorite excerpts from the book:

“We're too involved in materialistic things and they don't satisfy us. The loving relationships we have, the universe around us, we take these things for granted.”

“As long as we can love each other, and remember the love we had, we can die without every really going away. All the love you created is still there. You live on--in the hearts of everyone you have touched and nurtured while you were here. Death ends life, not a relationship.”

Posted by Robert Zamees at 1:38 PM